Jeffrey T. struggled with pain in both knees. “The pain was always there and it was always constant the more I stayed on my feet every day,” he says. When the pain became too great, he saw Eric G. Bonenberger, M.D., a board-certified and fellowship-trained orthopaedic surgeon at Orlando Orthopaedic Center.

After consulting with Dr. Bonenberger, Jeffrey decided to proceed with the staged bilateral total knee replacement procedures, opting to have both surgeries done within a few months of each other.

Today, he says, “I feel great. It’s the best thing I’ve done in a long time.”  Dr. Bonenberger specializes in joint replacement, knee, hip, and shoulder surgeries, sports medicine, and arthroscopy, and he successfully completed not one, but two total knee replacement surgeries on Jeffrey a few months apart.

Jeffery T. says, “The best thing about having this surgery was not having the pain anymore.” 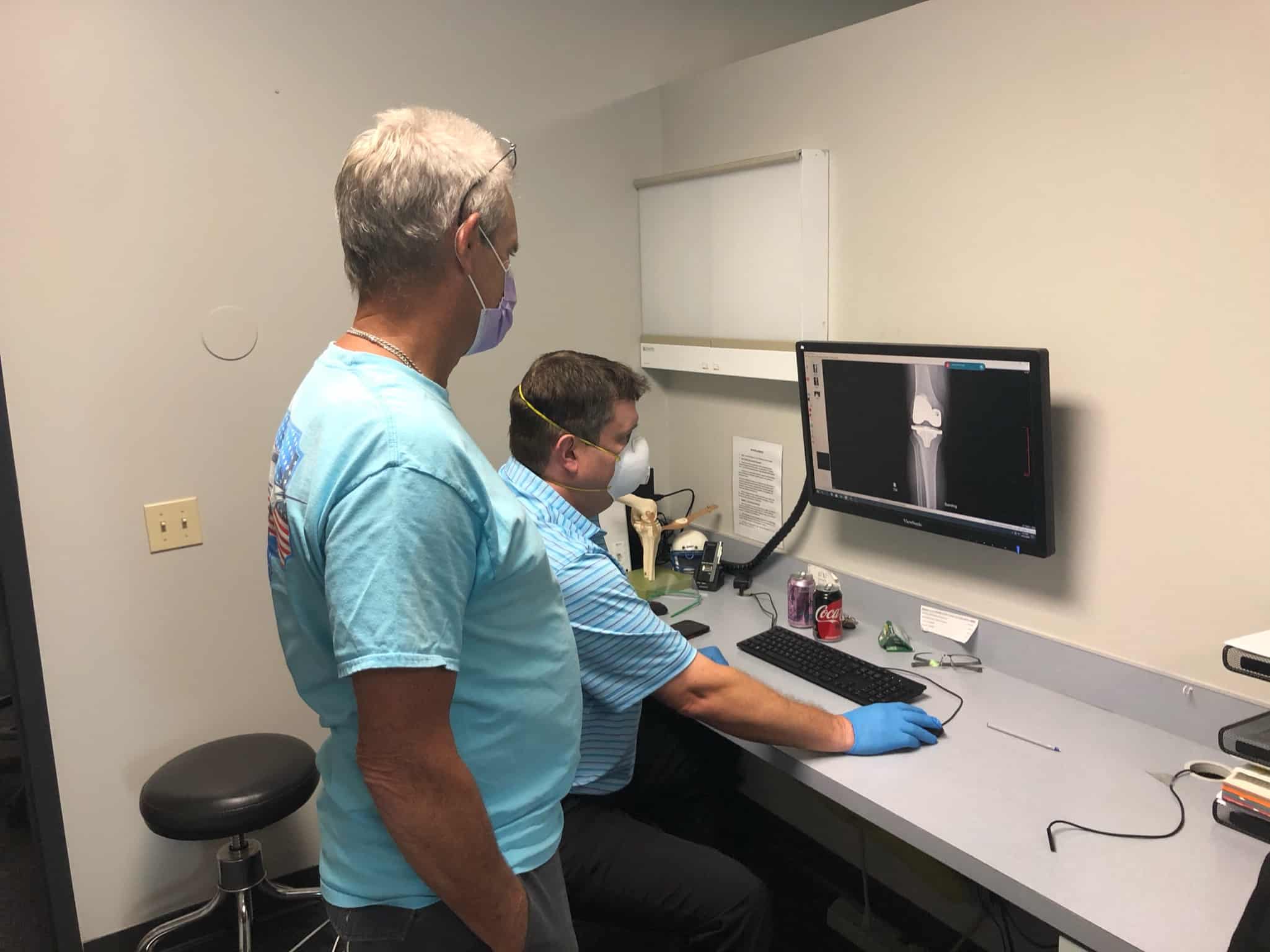 Knee replacement surgery requires a surgeon to repair the damaged knee joint by replacing the original surface with a prosthesis. The prosthetic is made of metal, ceramic, and plastic and it can restore the function of the knee and eliminate the pain of arthritis. Bilateral knee replacement surgery means that both knees are replaced, sometimes, as in the case of Jeffrey, each knee is repaired consecutively, several months apart.

The knee itself is a complex, weight supporting joint. The knee joint works to bring together the two long bones in the lower (tibia) and upper leg (femur), holding them at the flex point (patella) with muscles, ligaments, and tendons. Each bone is covered by a softer layer of cartilage that works as shock absorbers to keep the bones from rubbing together. Knee replacement removes the damaged portion of the knee itself and replaces it with a prosthesis cemented to the remaining bone.

A staged bilateral knee replacement surgery focuses on one knee at a time in two separate surgeries. Each surgery is about two hours long and are done typically a few months apart to allow time for healing. The goal is to allow one knee to heal before undertaking the second surgery.

With a simultaneous bilateral knee replacement, the patient undergoes one surgery to replace both knees. This means there is one hospital stay and rehabilitation during the entire process. However, the rehabilitation process is slower. Patients need more assistance typically after these surgeries and it is more difficult because both knees are affected.

Knee pain from arthritis can be debilitating, affecting your ability to walk, work, and participate in normal daily activities. The key symptoms of arthritis joint inflammation is stiffness and pain in the affected part of the body. In the knees, arthritis pain is usually a sign that the joint cartilage has worn away. Knee replacement surgery is typically used to help the patient control their knee pain symptoms. Typically, surgery is the final step toward pain relief for a patient that has tried a number of other remedies for their symptoms, including:

When patients have tried these treatments, but still suffer from pain or mobility issues, they consult an orthopaedic surgeon like Dr. Bonenberger at the Orlando Orthopaedic Center for help.

Are There Pros and Cons of Having Both Knees Replaced? 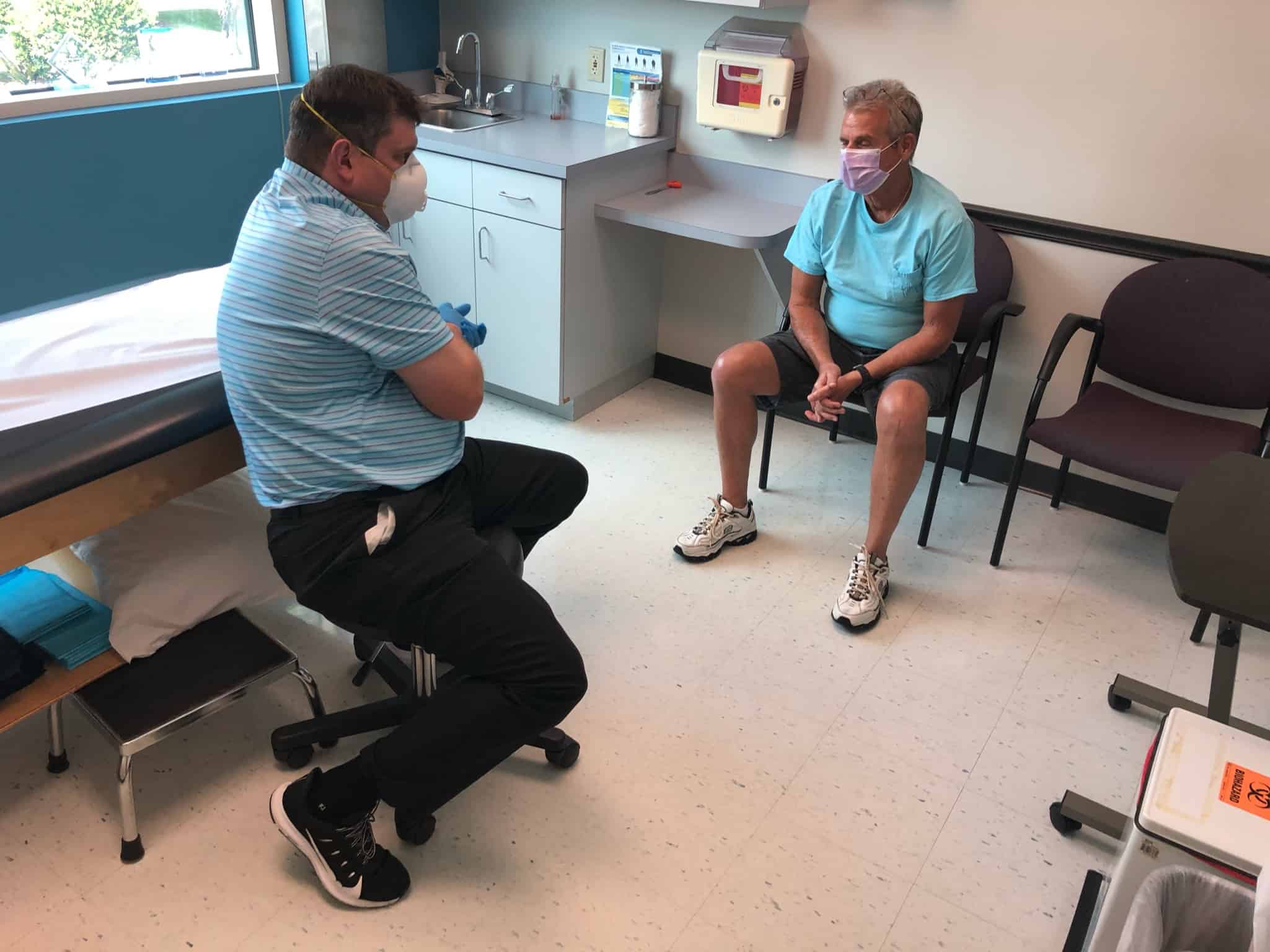 There are pros and cons of having both knees replaced in a staged process like Jeffrey. For patients experiencing pain in both knees, replacement of both can alleviate their pain and restore normal movement. The data shows that more than 7% of patients in their 70s and 10% in their 80s undergo these surgeries to alleviate their pain. The American Academy of Orthopaedic Surgeons (AAOS) reports that these surgeries are some of the most highly successful in the orthopaedic field, with more than 90% of these procedures considered effective. Patients experience less knee pain and higher function in these cases.

In Jeffrey’s case, he tried other treatments before undergoing the staged procedures on both knees. He had his knees scoped and received steroid injections until he finally says, “I’m done getting injections because they don’t last.” For Jeffrey, it was time to seek out a longer-lasting solution for his painful knees.

The benefits and drawbacks of staged bilateral knee replacements are associated with the costs and convenience of undergoing these procedures. For example, a staged bilateral knee replacement means you will have to take additional time to allow both knees to heal fully. However, Jeffrey says, “He did such a great job on the first one I really felt confident about him doing the second one.”

Undergoing knee replacement requires physical therapy, typically twice or three times each week for up to eight weeks. If undergoing a staged bilateral knee replacement that course of treatment is also obviously doubled. It can also be frustrating to go through the process of rehabilitating one knee from replacement surgery and, just when you think you’re done, have to undergo it a second time.

Jeffrey was excited about the possibilities the surgery offered. After the consultation with Dr. Boneberger, Jeffrey says, “He also told me that I’ll be able to play golf again, which I haven’t done in three years because of the pain.”

Jeffrey felt that a staged bilateral knee replacement was the best approach to getting his life back. He says, “The best thing that happened by having this surgery was not having the pain anymore.”