Bilateral Quadriceps Tendon Repair Gets Patient Back on the Job

Rick sustained an injury during routine duty at work, and as a result, ruptured the quadriceps tendon in both his knees, keeping him out of work for months.

“I’m probably about 85 to 90% (back to normal),” says Rick. “Dr. Schwartzberg is an excellent doctor. He listened to me. He was very attentive to what I was telling him, and he reassured me that everything was going to be alright because I didn’t think I would have the ability to move my legs again.”Click edit button to change this text.

What Is a Quadriceps Tendon Tear? 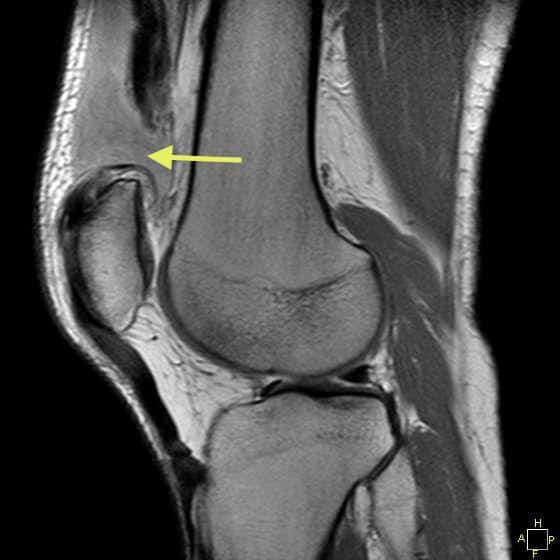 “Rick had sustained a fairly severe and not very common orthopedic injury,” says Dr. Schwartzberg. “He had fallen with one of his knees in a flexed (bent) position. It was a forceful flexion of the knee and his heel hit his butt. This resulted in a quadriceps tendon rupture. The quadriceps tendon is an extension of the quadriceps muscles which are the large muscles that make up the front part of the thigh. They insert into the patella (kneecap), and form a very strong tendon. That tendon, when it ruptures, often ruptures right from the patella.”

“I was walking to knock on a customer’s door and went to step on the porch,” says Rick. “It was a one or one-and-a-half-inch slab, and somehow my feet got misplaced. That is how I injured my right knee. Five days later, I was walking to the bathroom during the night and lost my balance because of my right knee injury. I fell and collapsed on my left leg. I had a quadriceps tendon tear in my right knee as well as in my left knee.”

How Do You Repair and Treat a Quadriceps Tendon Tear?

A physician will take into account specific factors when determining the best course of treatment for a quadriceps tendon tear including:

Patients with partial tears may respond well to nonsurgical treatments including:

Patients with complete ruptures require surgery to reattach the torn tendon. Best results are seen when the operation is performed shortly after an injury thereby preventing the tendon from shortening and scarring down.

“With both quadriceps tendons ruptured, we had to come up with a good strategy on how to repair them,” says Dr. Schwartzberg. “They both clearly needed to be fixed, but doing them both at once would have been a significant hardship on Rick. So we planned a staged set up, where we did the repairs ten days apart. They were both done as outpatient procedures, and he did phenomenally well.” 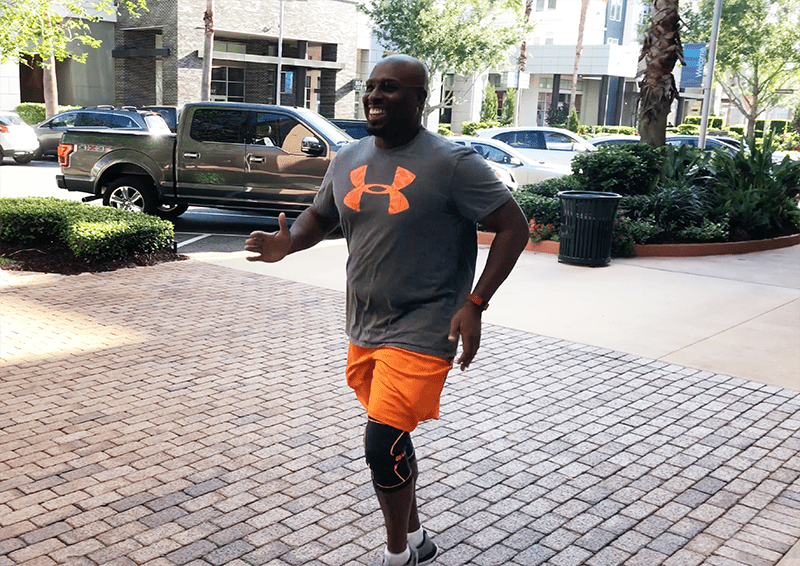 As with many surgical procedures, surgery is the first step on the road to full recovery, and this is particularly true in the case of a quadriceps tendon repair procedure.

After surgery, patients will usually be placed into a knee brace. A common knee brace allows the knee to be locked in extension. This straight knee position can make it safe for the patient to bear weight on the involved leg within a couple weeks of surgery. Supervised rehabilitation with skilled physical therapists and athletic trainers is important. The initial rehabilitation phase involves gradually regaining knee range of motion. It is typically safe to begin some quadriceps strengthening exercises six weeks after surgery. Progression to running and functional activities for sports often takes three to four months. Return to sports activities can often take six months from the time of surgery. Depending on the given activity, the return to sport and activity time may be longer.

Rick is almost back to 100% with no limitations eleven months after surgery, a feat he credits in large part to the Orlando Orthopaedic Center support staff.

“I can do a light jog, but I can’t make a full-on sprint, which is my ultimate goal,” he says. “Physical therapy is what really helped. The staff at Orlando Orthopaedic Center gave me hope and inspiration that I was going to get better. I appreciated the encouragement, the uplifting words, the ability to listen, for allowing me to voice my concerns, and let them know what was going on with me and where I wanted to be. Whatever pain I was having or whatever medication I needed, they took care of it and helped me in any way they could.”

Dr. Schwartzberg was equally impressed by Rick’s determination and the health success he achieved. “To me, Rick’s story is an inspirational one,” says Dr. Schwartzberg. “He’s someone who was injured at work, and someone who this system helped tremendously. He worked his hardest and he’s done a phenomenal job. He’s been able to get back to doing everything again because of his attitude and all the help he got along the way.”

“I was the one that wanted results,” says Rick. “I wanted to get back to 100%, and I think my drive allowed me to recover quicker than the average guy. It’s really up to the individual to put the work in, to commit to physical therapy, and to do their homework. Don’t get lazy, don’t get lax. If you want to get better, you can. You just have to put that 100% effort in.”

Now that he’s back to jogging and doing the things he loves, Rick is a little nostalgic for the close ties he developed with the Orlando Orthopaedic staff. “The staff and I got to know each other, and they would say things like ‘Hey Rick, how ya doing?’ And I’d answer ‘Yeah, I’m good.’ They’d say ‘How’s the leg?’ and I’d reply ‘It’s getting better.’ We were kind of like a family.”