MAKOplasty technology allows a robotic arm to help specially trained orthopaedic surgeons perform minimally invasive partial knee replacements in one or two compartments of the knee. For patients, that means a surgeon can virtually eliminate knee pain by selectively targeting a diseased part of the knee, removing it and replacing it while sparing healthy bones and ligaments to speed recovery time. Patients go home the same day of surgery following this outpatient procedure.

When Gary Stevens was told about the technology by Eric G. Bonenberger, M.D., a board certified orthopaedic surgeon specializing in partial and total knee replacements at Orlando Orthopaedic Center, he was thrilled at the thought of alleviating his pain and being what he called a “bionic man” thanks, in part, to the new technology.

“The biggest benefit (from the surgery) is not having the pain all the time, constant,” says Gary. “I don’t have to move in different sitting positions; I don’t have to stop walking, because of the pain in the knee.”

MAKOplasty is an innovative partial knee replacement procedure that uses a robotic arm along with a state of the art computer navigation system, to help pinpoint implant placement and enhance surgical accuracy.

The technology provides the surgeon with a patient-specific 3D model to pre-plan the partial knee replacement. Then, during surgery, the surgeon uses the MAKOplasty robotic-arm to replace the specific area of the knee causing pain due to osteoarthritis.

The surgeon is also able to visualize and fine tune the procedure prior to surgery by moving the patient’s knee through various range of motion exercises. The final plan is then programmed into the robot’s computer navigation system in preparation for surgery.

Throughout the procedure, the doctor is in complete control of the robotic arm. The arm’s navigation system will provide real-time sensory feedback, to ensure proper preparation of the bone, and correct, pinpoint placement of the implants.

The implants are fixed to the surface of the bone once a few millimeters of bone have been smoothly resurfaced.

“I was excited about doing the robotic surgery,” says Gary. “I’m all about technology. I like the idea of being a bionic man and I think the procedure is fantastic.”

Gary was also appreciative of the care he received from his entire patient team at Orlando Orthopaedic. “They did a fantastic job of answering all our questions and making sure everything was in place,” Gary says. “Because of some existing medical conditions, I had to go through a lot of extra procedures, and they helped us get through all that.”

What Are the Benefits of MAKOplasty Partial Knee Replacement? 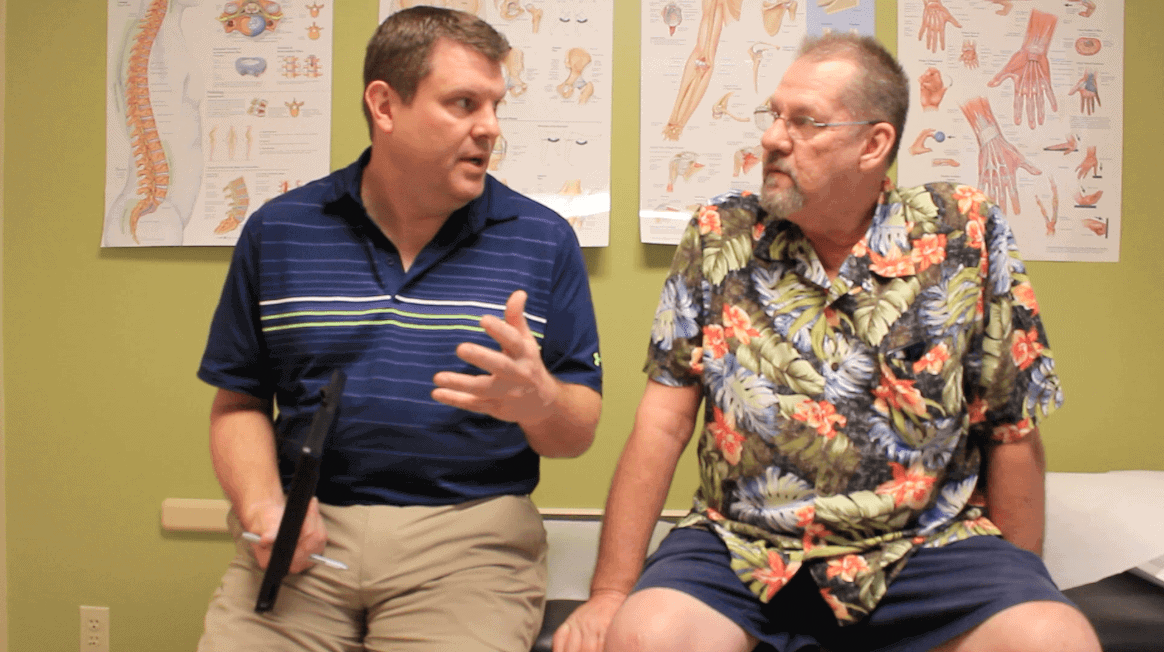 Perhaps the greatest benefit of MAKOplasty surgery is that it repairs only the deteriorated portion of the knee, and leaves the healthy parts of it intact.

Other benefits of MAKOplasty include:

What Are the Results of MAKOplasty Partial Knee Replacement?

In general, patients are able to walk out of the clinic, and between three to five weeks after the procedure, most report feeling better than they did prior to surgery.

Gary’s successful surgery is a testament to MAKOplasty’s effectiveness.

“Dr. Bonenberger got me up and walking the next day at the hospital after the surgery,” Gary says. “Five weeks out, the strength is coming back, it’s a lot better than it was. I can go downstairs a little easier, and the pain’s not there.”

Gary is also relieved that he didn’t wait to have the surgery done. “The reason I wanted to get it done now is so that I could have the mobility for the rest of my life,” says Gary. “They told me that the knee would last at least 25 years before it would have to be replaced, but I think it’ll last a lot longer than that.”