An increasing number of shoulder and elbow injuries have been seen in youth baseball pitchers for the past several decades. These young athletes are at particular risk because of their developing bones, muscles, tendons, ligaments and open growth plates.

Several culprits have been implicated for these injuries in youth pitchers including pitching mechanics, pitching quantity and pitch types.

Although there exists a variety of pitching motions, core principles have been identified that are considered proper. Biomechanical studies have identified a handful of common mistakes in the pitching motion that increase stresses seen by the elbow and shoulder. Such increased stresses may increase the risk of injury. 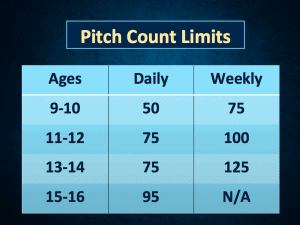 Although pitching mechanics are important, the greatest reason for shoulder and elbow problems in youth pitchers is overuse. Pitching amounts have been examined in a handful of studies published in the sports medicine literature.

It is clear that young pitchers who throw greater than specified amounts are at a significantly greater risk of injury. Discreet recommendations have been garnered to minimize injury risk. 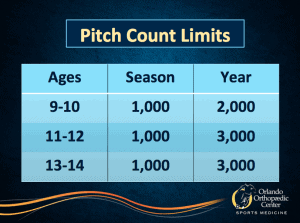 Tracking the amount of pitches that young players throw is the cornerstone of overuse prevention. Traditional attempts have revolved around placing limits on numbers of innings pitched. This is a flawed method because the number of pitches thrown can vary substantially in any given inning.

Based on valuable research performed at American Sports Medicine Institute in Birmingham, Alabama, pitching limits for various ages have been developed. In fact, Little League Baseball has adopted these pitching limits.

A more controversial area in youth pitching revolves around pitch types. Specifically, the curveball has been implicated for decades as a causative factor for injury in the young throwing athlete. 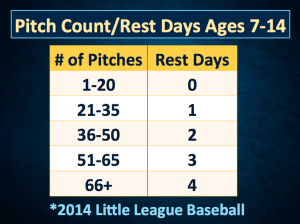 Recommendations by coaches, parents and physicians have often been to avoid throwing curveballs until puberty. Interestingly, biomechanical research does not support this concern.

In biomechanical studies of young pitchers, it has been demonstrated that fastballs place greater stresses on the elbow and shoulder than curveballs.

Further, changeups place lower stresses on the elbow and shoulder than fastballs and curveballs. However, it is likely that young pitchers lack the neuromuscular development and mechanics to throw curveballs properly.

When youth pitchers have multiple pitches, it is likely that they will practice pitching more to become accomplished with their expanded repertoire of pitches. This increase in pitching quantity would be great concern for overuse injuries; thus, it is recommended that young pitchers delay throwing curveballs and other breaking pitches until the ages of 13 and 14. 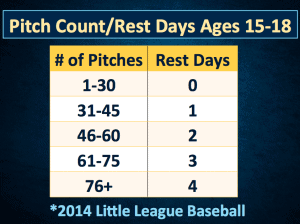 Other research-based recommendations to minimize injury risk to youth pitchers have been noted. It is recommended that youth pitchers not play catcher due to the increased volume of throws that would be made at the position. It is also recommended that youth baseball players not pitch on multiple teams with overlapping seasons. Additional recommendations include not throwing for three months each year and not continuing to pitch when they experience elbow or shoulder pain. Arm pain while pitching should be evaluated by physicians who specialize in sports medicine.

It is hoped that adhering to these principles will optimize injury prevention in the vulnerable arms of the physically developing youth baseball pitchers.