Six years ago, Joe Smith began having consistent trouble with a finger on his right hand: it would continually lock up and cause tremendous discomfort and even an inability to get work done on the computer. Over time this problem involved several of Joe’s fingers. He turned to Lawrence S. Halperin, M.D., a board-certified hand surgeon at Orlando Orthopaedic Center for diagnosis and treatment of his hand. Today, after completing recovery from trigger finger surgery, Joe says he is now back to work and doing the things he loves.

His story with Dr. Halperin started with a full exam to diagnose the problem. When all conservative methods had failed to provide relief, Dr. Halperin explained to Joe how trigger finger surgery would likely help him get back to work without the pain and discomfort that had become so troubling.

Once he healed from surgery, Joe says his only regret is how long he waited to have the procedure done.

“The biggest benefit is that I can now perform my job duties and ordinary things that I love doing,” says Joe. “I have the use of my hand again, without having the problem where it locks up and becomes very painful. You don’t realize how much you need your body limbs until something goes wrong with one of them,” he jokes.

What is Trigger Finger? 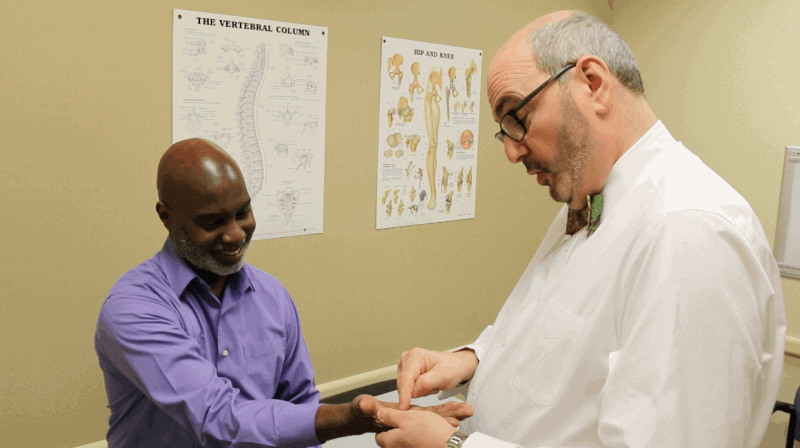 Trigger finger, known in medical parlance as stenosing tenosynovitis, is a painful condition where inflamed tendons in the hand cause a finger or thumb to lock in a bent-down position.  The finger becomes difficult and painful to straighten.

Dr. Halperin is no stranger to trigger finger, having treated many patients with the condition and even having experienced it himself.

The tendons located in the palm of the hand originate in the forearm and come into the fingers through a narrow tunnel. When these tendons become inflamed, they can develop tiny nodules, wreaking havoc in the already tight tunnel, and impeding the regular function of the fingers.

There are no clear-cut causes of trigger finger. However, trigger finger is more prevalent in women than in men, and adults between the age of 40 to 60 are most commonly affected by it. Trigger finger may also be linked to other illnesses such as rheumatoid arthritis, gout and diabetes.

Trigger finger can result from overuse and repetitive strain on the hand such as when repetitively working on a keyboard, with industrial machinery, or with power tools that require prolonged gripping.

What Are the Symptoms of Trigger Finger? 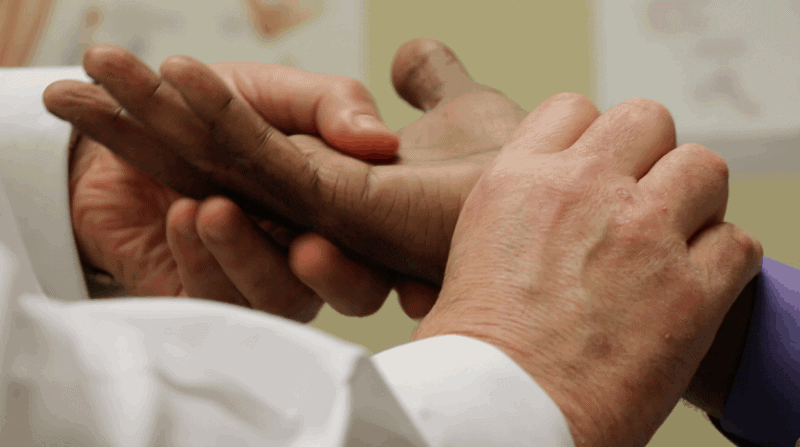 Trigger finger symptoms may evolve from mild to severe over time. Symptoms typically begin with an irregular, harmless clicking of the finger, and can lead to significant discomfort. Trigger finger more often impacts the thumb, ring, or middle finger, and multiple fingers may be affected at once.

Symptoms of trigger finger may include:

“I do a lot of computer work,” says Joe. “There were times when I would be typing and the finger would just lock up and it would almost knock me down to my knees it was so painful.”

How is Trigger Finger Treated? 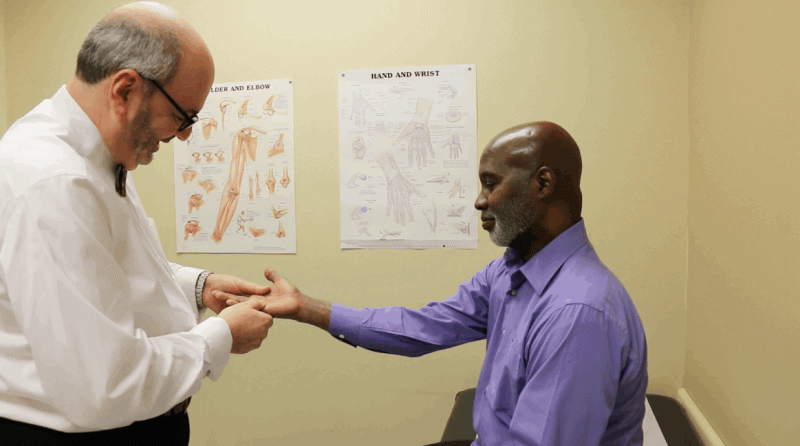 Milder cases of trigger finger can usually be treated with nonsurgical methods such as rest, and anti-inflammatory medication. Corticosteroid injection is usually successful in curing the problem by causing the swelling within the tendon to improve. Once the swelling goes away the tendon can move more easily through the tunnel.

When conservative treatments prove ineffective at resolving the problem, minimally invasive outpatient trigger finger surgery can be considered. During trigger finger surgery Dr. Halperin makes a small incision near the tunnel at the base of the finger. The tunnel is opened which allows the tendon to glide freely without getting caught.

“Mr. Smith was one of those patients who did not get better with steroid injections,” says Dr. Halperin. “He underwent a 15-minute operation. The sutures came out about ten days later. He exercised the hand for a little while, and fairly quickly he was back to full activities, full work, and no pain. He had a very good result.”

“Now I’m back at work, I’m able to function and do my job, and do things that I often take for granted with my right hand,” says Joe. “If I had to have the surgery again, it’s a no-brainer for me, I’m going to seek out Dr. Halperin.”